My Dizzy art - I made a Dizzy tileset for Kyodai Mahjongg

My Dizzy art - I made a Dizzy tileset for Kyodai Mahjongg

Kyodai Mahjongg is probably the most customisable of all solitaire mahjong games.Its most amazing feature is the simplicity of creating tilesets: you only need to create a JPG or BMP image with your tiles and save it in the game's "Tilesets" folder and the game seems to be programmed to automatically cut it into tiles. Probably even if you put any sufficiently large random image, the game would automatically cut it into "tiles" based on its proportions...
The game's website seems to be no longer working (anyway, the game was made in 2006), but here's a download link: https://softfamous.com/kyodai-mahjongg/.
So I made a Dizzy tileset, using images from Dizzy games. Original mahjongg has seven subsets of tiles, here are its equivalents:
dots (9 pairs) - Yolkfolk family and friends
bamboo (9 pairs) - items (all from "Fantastic Adventures of Dizzy" because they are larger in this game)
Chinese written numbers (9 pairs) - background pieces and animals
seasons (only 4, any can be paired with another) - Dizzy himself
flowers (only 4, any can be paired with another) - enemies
winds (4 pairs) - collectables
dragons (3 pairs) - logoes (including just "Dizzy" written with Cyrillic Dizzy font)

I'm worried that it seems slightly fuzzy after uploading, it shouldn't... Let's keep this as overview and if someone wants to play Dizzy mahjong, I can send you the undistorted file.

edit: it seems that if you save the file, the correct version will be displayed. Strange...
Top

Re: My Dizzy art - I made a Dizzy tileset for Kyodai Mahjongg

Having played Mahjong before, it looks good to me.

Re: My Dizzy art - I made a Dizzy tileset for Kyodai Mahjongg

I changed the file a bit - was just replaying "Crystal Kingdom Dizzy" and decided that the image on top should fit and look better than Dizzy from "Fantasy World Dizzy". 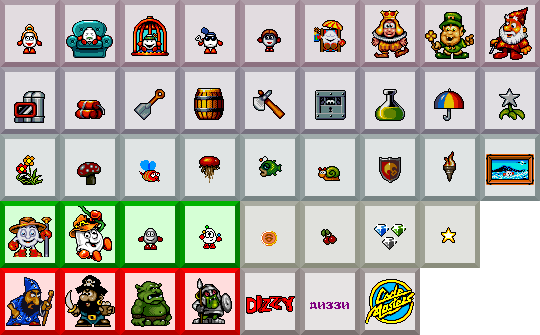