The yolkfolk are playing hide and seek. It is Dizzy's turn to be the seeker whilst the others hide.

The aim of the game is to find where the yokfolk are hiding. Pretty straightforward eh! Of course its not. The yolkfolk are a clever bunch and have hid themselves behind a large web of puzzles. It is up to Dizzy to solve them in order to find the yolkfolk. 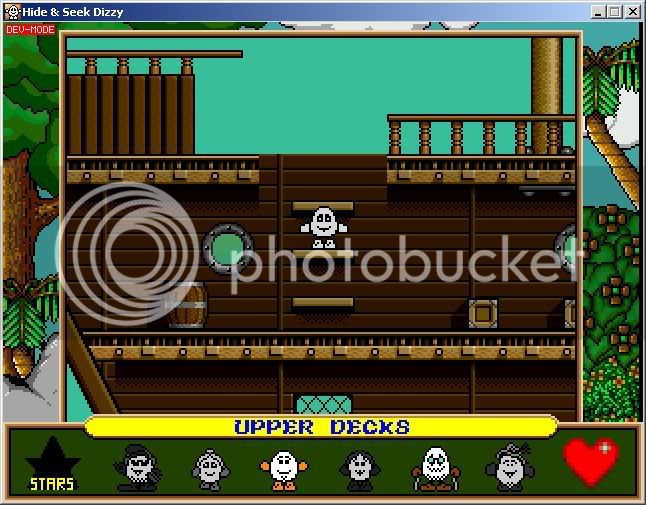 I like the look of this! Good luck with it!

"Quotes from the internet may not be genuine" - Abraham Lincoln
Top

Can't wait to play this one, good luck with it

looking forward to this

Nice, this look and sounds pretty good.
Its always the cracked ones that let the light in
Top

I wonder if it would be a cool idea to work like a real hide and seek game, like when you find someone to have to out-run him to the original place where you counted

I wonder if it would be a cool idea to work like a real hide and seek game, like when you find someone to have to out-run him to the original place where you counted

That's not how I played hide and Seek... we just had to find each other!
WhyNotSmile?
Top

We played the "extended" version then

One kid counts at a wall (or tree) while the others hide. Then he looks for them and when he finds (or spots) someone he must run back to touch the counting wall and call the name of the one he found.

If he gets the wrong name and thought he saw someone else, he looses and counts and seeks again in the next round.

If the other kid outruns him and reaches the counting wall first, the finding doesn't count. The first kid who's successfully found will have to seek in the next round.

While the purpose of the seeker is to find and outrun the other kids, their purpose is to reach the counting wall without being seen.

If all the kids manage to sneak or outrun the seeker he must seek again in the next round.

There was another rule: if the last kid manages to sneak or outrun the seeker all the other kids are "saved" and the seeker has to seek again in the next round.

There were also a lot of tricks and counter-tricks. Like hiding right behind the seeker's back and after he finishes the counting you just touch the wall and you're safe. However if he mention that any person behind him is "found" you loose. But you can hide in the three where he counts or behind the wall or pole. Also changing clothes was a smart trick

Best played when dark with a lot of kids. And it sucked when the seeker fears to go searching away from the wall. Then kids could call to lure him. Or in some serious cases, even expel him from the game.

And of course the specific words and calls what might not make much sense if translated, but they added a lot of fun to the game.

Not to mention the initial counting rimes for who gets to seek first. There were a lot of versions but some kids learned where to start the counting so, depending on the number of kids, to avoid being last. So it was also a matter of who can be trusted to do a fair counting...