DizzySE or Dizzy Scripting Engine - is the environment for the development of Dizzy-like games for the home computer ZX Spectrum 128 and its clones. A key feature of DizzySE is to rid the developer of programming on assembler language and knowledge of computer architecture. Everyone can make their own Dizzy. It is only necessary to learn a very simple scripting language and to know any graphic editor capable of working with images with indexed color. DizzySE engine provides almost all situations that occurred in the classic Dizzy serie. Those situations that are not provided for in the engine can be implemented using scripts. As a map editor for DizzySE, the familiar to many, time-tested and well-proven editor DizzyAGE was used.
The engine is actively developing. Future plans: adding new features and functions both for the engine itself and for the IDE. 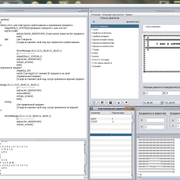 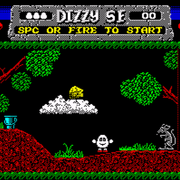 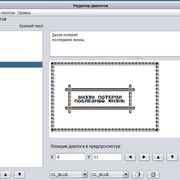 http://dizzyse.ru/index_eng.html
Here you can download DizzySE itself and its detailed documentation (Sorry, documentation is only in Russian yet), as well as various additional resources, games, etc.
Top

This all looks really interesting.

I will mention this engine when I work on the news round-up article for Yolkfolk.
In the meantime, I've added your site to the Links page.

I have installed this tool, it works great.

I have some questions:

1. Does it handle memory above 64k? I am using a ZX Spectrum 128k machine and I want to know if I can use all memory, or I need to create several levels for all data over 64k.
2. I've found a strange behavior in the template game that is created with a new project. If I open the map with DizzyAge and just move one of the existing tiles or change the property from air to solid or something else, the compiled game will not run anymore. Just freezes at start screen. Is this a bug, or I am doing something wrong?

If I add new tiles this does not happen.

3. Do you plan to translate the documentation? Also more examples are welcome.
Top

1)DizzySE uses all memory of 128kb machines.
One level takes:
16kb for map,
14kb for materials map,
11kb for texts and scripts
and 16kb for tileset.

It's about 35-45 rooms depending on detail.
The rest of the memory is allocated to other resources (music, sounds, sprites ..) and the engine.

If you want to make a game with a larger map, you will have to split it into several levels.

2) Strange. Can you zip your project with this bug and send it to me? Hippiman@dizzyse.ru

3)The documentation is almost completely translated to English.
In late April - mid-May, we will release a new version of the engine with a large number of updates. Documentation will be ready for this period.
Top

I've just created a new project, opened the map and moved some of the leaves from the left a little. Saved the map and compiled the game.

I am using Spectaculator 8.0 as emulator. Did not try it on the real computer yet.

You accidentally created several objects with tileset N 0.
DizzySE operates only with his own tilesets: 511,512,513.

Just put this updated script to TOOLS folder into your DizzySE installation folder.
It ignores all objects drawn by tilesets with non-DizzySE IDs.
https://yadi.sk/d/YSOOv87jJt2HCw
Top

Thanks, it works.
Top

Any new on the new version of the scripting engine?
Top

This is a very important update that adds some very useful features.
Such as: able to call script from another script and ingame stack.

Now more about everything:
Manuals are translated to English!
Fixed several bugs, both in the game engine and in the IDE.
Made many changes and improvements to the IDE and game engine:

Manuals are included in the distribution and open directly from the IDE.[/list]
The interface has been slightly improved.
New features in the scripting language:[/list] Dynamic objects are drawn taking into account the frame field, regardless of whether animation is included in them or not.[/list]
Slightly changed the physics of the movement of the character.
The IDE has added the ability to obtain project statistics. The log window displays a summary of the size of all project files: how much space the file takes and how much space is left.
Also checked the type of music track (single chip, turbo sound).
Changed the storyboard player animations. Now 4 frames are allocated for IDLE animation, and 3 frames for DEATH.